The sound of steel will ring out loud and proud once again this summer, as the death/thrash/shred metal quartet EXMORTUS return to the tour trail for their first live dates in more than 18 months. As road warriors who’ve toured extensively in recent years with the likes of Amon Amarth, Death Angel, Abbath, Marty Friedman, Obituary and Dark Tranquillity, it was an uncharacteristically quiet period for the California based slaves to the sword, but the band promises their summer shows are the first of many more to come.

“It’s been way too long!” exclaims singer/guitarist Jadran ‘Conan’ Gonzalez. “Words cannot express how excited we are to hit the road again! Can’t wait to shred your heads off this Summer!”

EXMORTUS been working diligently on new music and plan to release in 2022. It’s been some time since the band released a five-song EP in Oct 2019 titled ‘Legions of the Undead‘ in conjunction with M-Theory Audio. In addition to neoclassical-tinged covers of Danny Elfman‘s ‘Beetlejuice‘ theme and Bernard Hermann’s iconic ‘Psycho Theme,’ the set included two new original tracks and a powerful rendition of ‘Night On Bald Mountain,’ a classical piece originally written in the 19th Century by Russian composer Modest Mussorgsky. EXMORTUS new album recording and new label home will be revealed in the coming months. 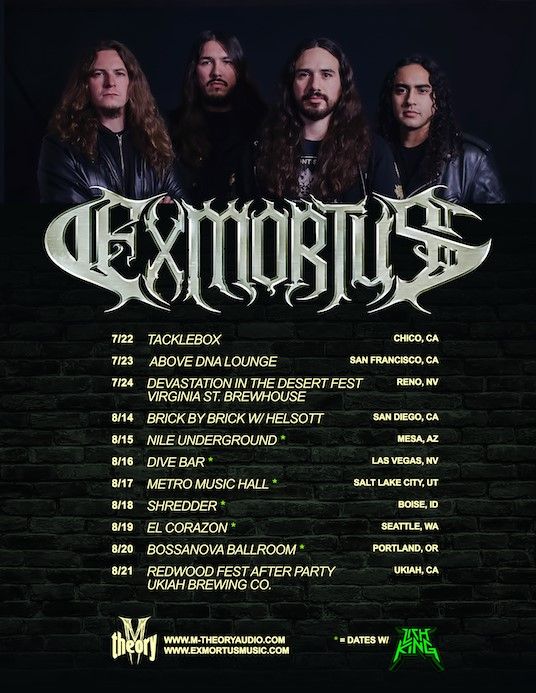