METALLICA mark the 30th anniversary of their titled fifth album — a/k/a ‘The Black Album’ — with two landmark releases, both out 10th September via the band’s own record label Blackened Recordings.

The Black Album is one of the most commercially successful and critically acclaimed records of all time. It’s 1991 release not only gave Metallica their first #1 album in no fewer than 10 countries, including a 4-week run at #1 in the U.S., it’s unrelenting series of singles — ‘Enter Sandman,’ ‘The Unforgiven’, ‘Nothing Else Matters’, ‘Wherever I May Roam,’ and ‘Sad But True’ fuelled the band’s rise to stadium headlining, radio and MTV dominating household name status. The album’s reception from the press was similarly charged, building over the years from the top 10 of the 1991 Village Voice Pazz & Jop national critics poll to becoming a constant presence in the likes of Rolling Stone’s 500 Greatest Albums Of All Time. The album’s impact and relevance continue to grow as proven by one indisputable fact: The Black Album remains unchallenged as the best-selling album in the history of Nielsen Soundscan, outselling every release in every genre over the past 30 years.

Much more than a mere tribute album, ‘The Metallica Blacklist‘ celebrates the enduring influence of this musical milestone with one of the most ambitious projects ever conceived by the Metallica team: An unprecedented 50+ artists spanning an unbelievably vast range of genres, generations, cultures, continents and more, each contributing a unique interpretation of their favourite Black Album cut.

The Metallica Blacklist offers up new dimensions of the record whose gravitational pull first drew the mainstream to Metallica—and provides new insights into the universal and timeless appeal that kept it there: the boundary-smashing influence these 12 songs have had on fans and musicians of all stripes. The Metallica Blacklist’s 53 tracks find singer songwriters, country artists, electronic and hip hop artists sharing their love of these songs alongside punk rockers, indie darlings, icons of rock, metal, world music and many, many more… and for 50+ good causes: Profits will be divided evenly between charities of the artist’s choice and Metallica’s All Within My Hands Foundation.

‘The Metallica Blacklist’ is a fitting and limitless homage, one that features bands who’ve shared stages with Metallica alongside artists who are younger than the original album. It’s a truly staggering, at times mystifying assemblage of musicians, dozens of whom have little to nothing in common other than the shared passion for the music that’s united them for this album: 1 Album. 12 Songs. 53 Artists. Unlimited Possibilities.

* All profits from The Metallica Blacklist will be split evenly between the All Within My Hands Foundation and 50+ charities chosen by the artists who play on the album. All Within My Hands was founded by the band in 2017 as a way for the entire Metallica family to give back to communities that have supported the band by supporting workforce education, the fight against hunger, and other critical local services. 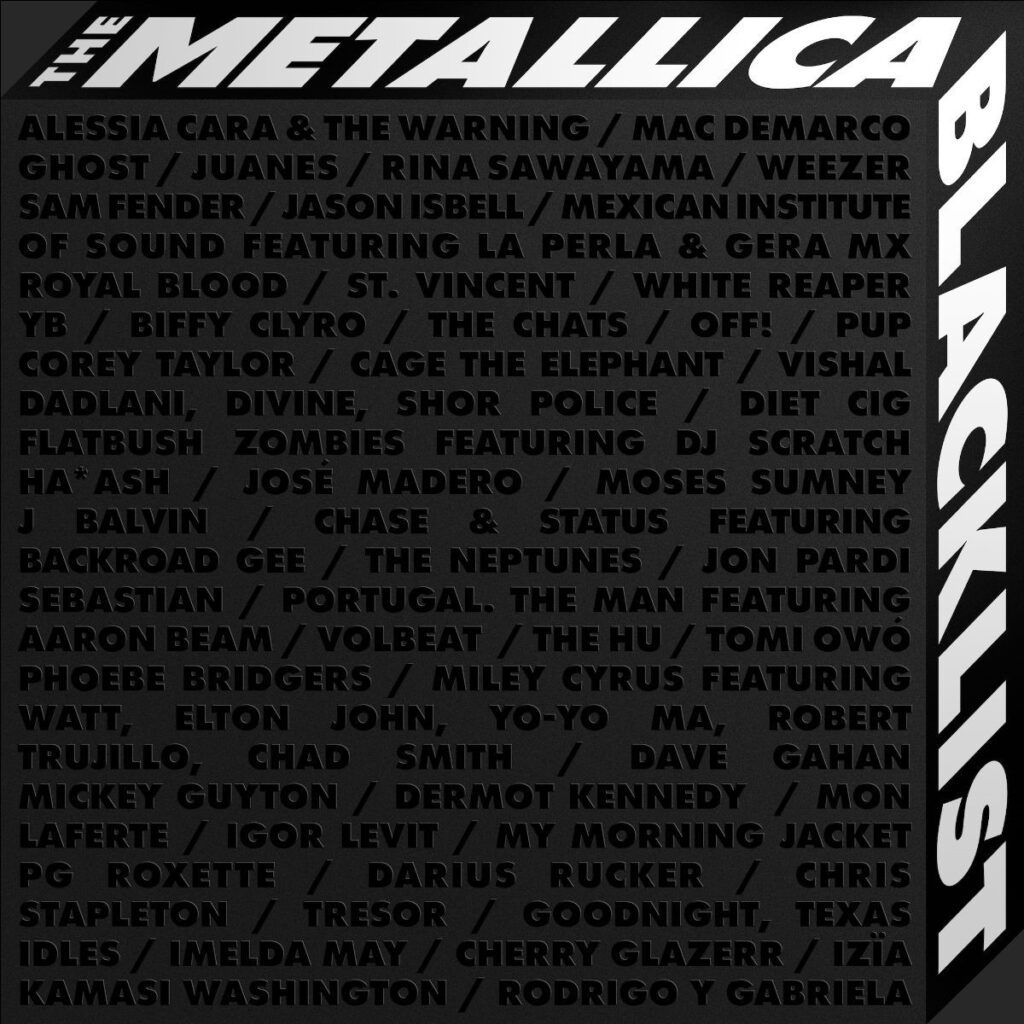